I've been adding to the codebase the expansions I'll need in order to do road and town locations based on triangles. The first chunk of edits I needed to do for that was also just what I needed in order to add something new to the civilized-wild distinction. Have a look at the latest map image; as usual, I recommend opening it in a new tab to see it full size. 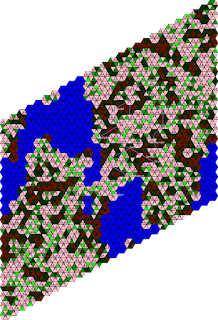 Wilderness triangles are now divided into categories 1 through 4; on the map, these are indicated as bright green, olive green, deep forest green, and red-brown. The higher the rating, the more wild and savage that part of the wilderness is. What determines the rating is how many other wild triangles border the given triangle.

The next phase would be to have the initial 1-4 rating of triangles in each hex propagate a fraction of their value into neighboring hexes' triangles, influencing their ratings. In other words, the wilderness points would be distributed across the hex grid, similar to my method of blowing moisture inland from the oceans during the world-generation step. Therefore, the final wilderness ratings would take on values between the integers 1-4, and some hexes' wilderness ratings would go far beyond the previous cap of 4.

Such an upgrade would result in  patterns of wild and extremely wild areas which would measure the opposite of what infrastructure measures -- and would certainly influence a hex's base infrastructure value.

While working on this I also decided to make all water hexes all-wild (type 1); this is OK because now, with degrees of wilderness, sea triangles next to shore will be rated at the lowest wilderness rating, meaning they are the closest type of wilderness to being civilized.

If I used the wilderness rating propagation proposed above, then, given the way I'm doing sea hexes, the deep and distant parts of the ocean would be extremely dangerous.

Posted by Maxwell Joslyn at 5:18 PM