First off, I want to share the new and improved design of my trade table. Before, when the table existed only as output on a computer terminal, it was difficult to get the monospaced font and rigid layout to play nice with a file viewer or printer. As you can see below, I've given it a new look, which not only makes it easier to read, but also has made it very easy for me to print off. In addition, since last time I've added a "units" column for those items which require a measurement other than their weight. 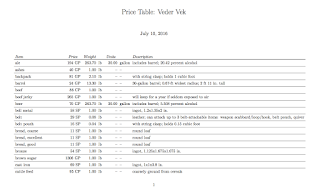 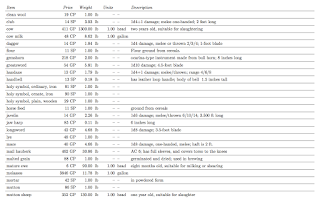 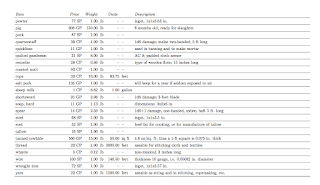 The beautification was accomplished by outputting a version of the contents annotated with LaTeX markup to a file, which is then compiled by PDF LaTeX into a PDF for easy use and clear reading.

And for another milestone: as of right now I have reached 99 recipes in my system, an increase of 25 from the listing given in this blog's very first post. See if you can spot all the new items on the table (fewer than 25 new ones, since some of the 25 are undisplayed "partial goods.") Several still need tweaking, and some need serious tweaking, but for now I have numbers I can work with.

Now that I've shown the latest version of the price table output, I'll take a few steps back and return to where I was last time with explaining the pipeline of programs which build up to this table itself. Today's agenda is the imports and pricing calculator, which proceeds in several steps.

Note: the importing algorithm above, and the basic method described here for calculating price-per-reference and then price-per-lb/oz/etc, were originally described by Alexis at the Tao of D&D. Although he's updated his approach in some areas by now, I think they survive mostly intact in my implementation, so let's give credit where it's due. On the other hand, although the idea of combining resources into recipes to get the price of more complex goodsalso comes from Alexis, once we move forward and start talking about the details of the recipes themselves, we will be talking about my own original work and research into the production of commodities in an early modern world. I hope it is at least a little realistic.

Posted by Maxwell Joslyn at 5:52 PM