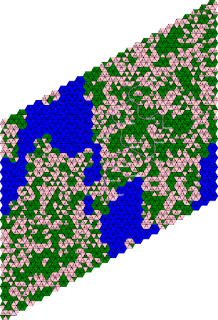 I can already see I'm going to have to move some towns around, in order to put them into hexes with all civilized hexes. A sizable town (whether it is a castle town, or a trade town, or a religious site, or whatever) is only considered to be "possible" in a hex which I've determined to be fully civilized -- although in reality it would be the town's presence which made the area "civilized." The reason I have to work backward is because I am choosing to place cities manually; if I wanted, I could go back to random town placement, which I used to do, and have their locations be limited to only (a subset of) type 7 hexes. But I'm not going to do that.

Note that at this time water hexes are technically still being assigned civilized and wilderness triangles, but in this image I'm hiding the civ-wild visualization for them. The civ-wild distinction as currently formulated for land hexes isn't the right approach for water, I think. On the other hand, it'd be reasonable to want something resembling "civilized" triangles wherever there are shipping lanes (and patrol ships), as well as inhabited islands. I'm not sure right now just what I'm going to do about the water hexes, but I'll think of something eventually.

Posted by Maxwell Joslyn at 9:27 PM