My game is on hiatus until the new year, give or take, as the holidays descend upon us and we all scatter to visit our families. I'm still in school, although classes themselves are over: finals are next week and the deadline for the first chunk of my thesis is in a week's time.

The other day, in between work on my thesis and my classwork, I made time for some D&D work. Apart from futzing with rules for light and illumination (still rough), I reworked my drunkenness table (based on Alexis's post here) so that it is much easier to use.

Here is the original version before my rework. The player has to find the right row for their Constitution score, then remember whether or not they have to account for their current drunkenness, then try and figure out how many of each kind of drink they've had and how to add those together, and only then can they figure out their intoxication level. In short, it was slow and clunky, and since I couldn't account for someone drinking both kinds of alcohol, it felt pretty artificial.

The new calculator is a breeze. Put in all your values and don't adjust Con for your current soggy state, put in the number of drinks so far, and boom, your intoxication level is presented. 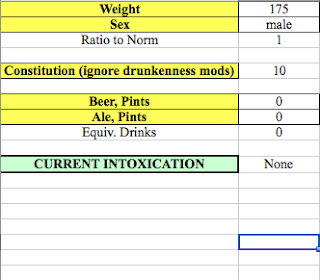 I chose not to add the effects of each intoxication level because I am still tweaking those. They are on the website, here.

Anyway: the point of all this is that this is just plain how working on D&D goes. You make a thing and either it's just plain bad or it's OK but it slows the game down. You figure out where the sticking points are and you make it better. When it's roughly how you like it you put it aside and turn to some other thing, confident that maybe next year you'll have an epiphany and rush back to the thing you set aside for some more fiddling.

A year ago I had nearly nothing made and was basically just getting back into D&D after a couple years feeling discouraged and not up to being a DM.

Now I have maps like the one here. Even if they are low on detail and the world they depict is made up, they exist.

Now I have a trade system based on the data in those maps, which is up to 148 items: double the amount I had programmed when I showed it for the first post on this blog! (That comes as a real shock, believe me. Who knew I'd added so many odds and ends to the equipment list?)

Now I have a website with no small number of my rules on it (even if it's a bit clunky to maintain).

All of these are progress. I wonder where I'll be next year? Better keep working to find out.

Posted by Maxwell Joslyn at 1:01 AM