I was texting with a player of mine today after they had let me know they'd be unable to come to the game this evening. They recalled that they had been laid out unconscious by a bear's paw in the previous session, a few weeks ago when we last played before the holidays.

Then they said to me something like "I guess I'll see if I have any possessions left when I return."

This struck me as odd, so I asked whether they were used to other players taking their stuff when unconscious. The player's response, paraphrased: "No, but we aren't exactly scrupulous people, and in character there's not much reason for loyalty or camaraderie." Emphasis mine.

This is the kind of stuff that makes me wonder what the hell is going on in other people's games. Am I supposed to believe that my poor player has played in groups where it is perfectly fine to steal from other PCs -- or do god knows what else -- merely because there's no "in character" reason for the party members to trust each other?

In real life, trust takes ages to be established. However, if a group of PCs decide that they're going to be stubborn about cooperating because they don't trust each other, all that is actually going on is this: a bunch of real-life people who have shown up to participate in a group activity are now sitting around dragging their heels instead of actually playing the game.

To say nothing of some dysfunctional group in which this behavior extends to pranks or theft ... or, god forbid, one in which the DM encourages such behaviors. Who wants that kind of bad blood between party members? What the hell kind of team is supposed to be assembled here?

The reason I don't bother with establishing trust between the PCs is because they are special in the real world. Because they're being played by real goddamn human beings taking time out of their lives to meet up for a few hours a week, who don't have time for Edward to get suspicious every time Peter's fresh level 1 fighter suggests a course of action, just because "we only just met you in the last village back, why should we believe you?" The fact that adventurers are usually solo roamers is a convenient layer with which we support the assumption that an additional party member might be found almost anywhere, when the time comes to add one newly-rolled; it doesn't mean that we have to respect every single truth about interpersonal relations when a new member joins the fold.

[Don't be a fool and assume any of this applies to the party's relations to the world. You want to get to know a barkeep, a merchant, a guardsman and have him trust you? You're going to have to earn that trust. But those guys are all NPCs. They're not part of the PC in group. If you really want to roleplay out the process of people coming to trust each other, in a slow fashion resembling real life, perfect! Many PC-NPC relations are like that. But the party needs to know where they stand in relation to each other, with no questions, no suspense, and no pettiness.]

Let me make this clear, in public, where current or potential players can read it. Rule zero at my table is that if you are an asshole to the other players, I don't give a shit whether it's in character: you will be ejected and you will not be asked back.

That should give players like the one I talked to today some comfort.

Edit: in further discussion my player said their comment was mostly joking, so I removed one section speculating about the origin of such a worldview.
Posted by Maxwell Joslyn at 5:34 PM No comments:

This post is quite simple. In the six months since I began this blog I've slowly added items to the trade table I wrote about in the very first post. Recently, I reached and then surpassed 148 items, which is a milestone because it's double the number of items in the original posting.

To celebrate, here is the table as it stands. The pretty version is buggy right now, unfortunately, so this is the less-pretty version. If you are having trouble reading them, click the images for full size. 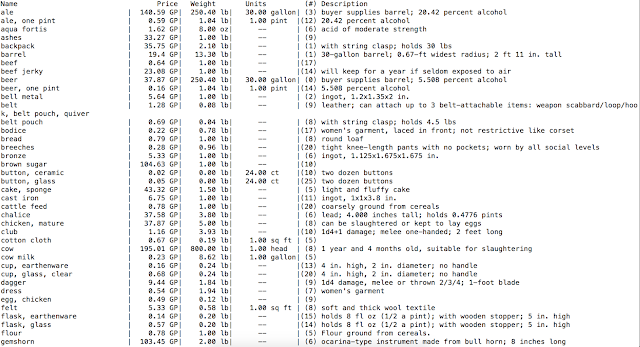 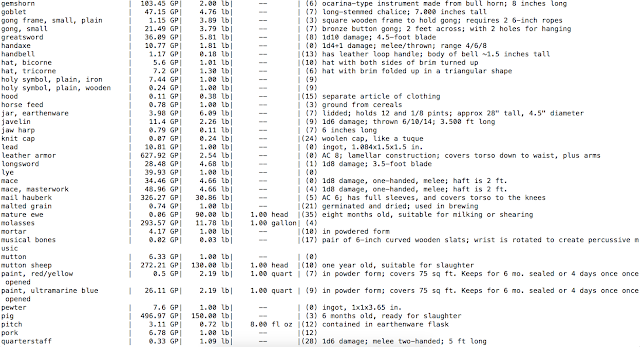 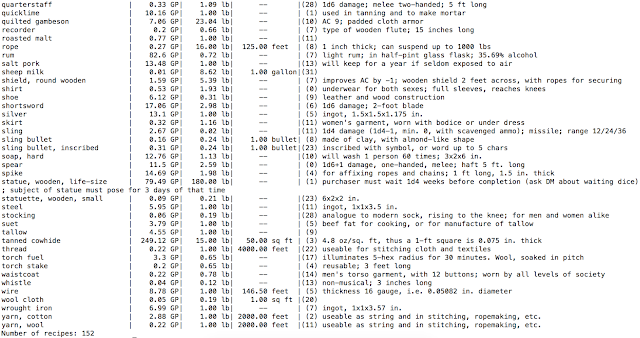