Another Round of Item Prices

I was sitting at a hundred and ninety-something recipes in the trade program for a week or two until this week, when I hunkered down and added some things which I'd had to make up ad-hoc weights for last time. Now I am past 200 items inside the table's workings, which is the milestone I set myself for making this post.

So: here is the current trade table, for the market town nearest to the party. (I've also attached screenshots of the version at the bottom of this post.)

Some of the 54 new items since the last time I posted a trade table listing include: coat of plates, half- and full-plate and their component pieces, hide glue; arrows; the bow and its components (which necessitated detouring into the hide glue calculation); two types of ladder (which was related to a revamp of the climbing rules); two types of salted fish; tobacco and a pipe to smoke it with; new types of metal.

Restructured old recipes include splitting beer and ale into "by the gallon," "bottled for carrying along with oneself," and "purchased to drink immediately." I also squashed several bugs associated with the pricing of leather objects, including leather armor, making those items much more reasonable to purchase. 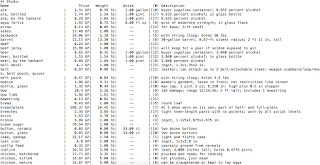 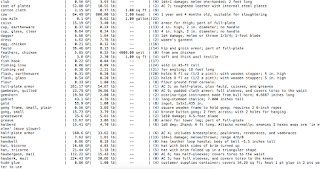 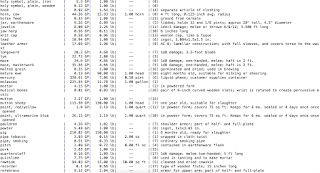 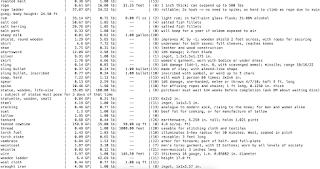 
Alexis has a new venture: comics. This one perfectly captures what players like to do with their time in the game world.

Goat took your pouch? Burn it. Hireling fucked up? Fire him. Those guys shot at me? Shoot back!

When the party is wronged, they like to punish people! They'll want to get those fuckers!

When in doubt, the DM can always make a fight personal, and then capitalize on that emotion of indignance. It will drive players to jump into action.

Just be careful not to stir it up all the time. Any emotion will get stale if it's overused.

Posted by Maxwell Joslyn at 1:59 AM No comments:

I'm finishing up adding a wooden ladder to my price table. Sounds simple, right? Have a look at my thought process below, to see what I think about when I add something to the table.

I'm modeling each rung as a carved cylinder of diameter 1.5 inch and length 1 foot.

This is just a plain old straight ladder, so the side pieces are two long planks. I've got them here as 17 feet long each, with width and depth both 2 inches. Distance between rungs is 1.5 feet, so that's ten rungs plus a foot of extra at the top and bottom.

(If you're Alexis, sit down for this one.) I've only got one type of lumber in my game. Its density is 40 lbs per cu. ft. I'll concern myself with multiple types one day, but not now.

Total the volume, multiply by density of lumber, and she comes out to 42.69 lbs.

If wooden ladders are this heavy then that's just incentive for the party to carry around a rope ladder or climbing ropes instead. On the other hand, I'm making some sorely-needed expansions to the climbing rules so that a wooden ladder is the safest way to climb. A rope ladder will still sway as you go, meaning there's still a skill in climbing one (though it's not as hard as a rope.) Furthermore, if there's nowhere to toss the support hooks, you're going to have to spike it like a rope at the top; in that case you can't climb somewhere you haven't been to the top of. A wooden ladder has no such restrictions.

I originally wrote this post as asking for a sanity check on my calculations (and please do offer criticism.) I was worried that it was coming out too heavy. But now that I've thought out loud about how it fits into the climbing-equipment ecosystem, I'm actually fine with the weight! If the party wants the most reliable way to climb they're going to have to cart one of these suckers around.
Posted by Maxwell Joslyn at 5:20 PM 1 comment:

Setting Up a Default Hexmap

As of last session I have finally gotten the hang of drawing a map on the computer during play. I've resolved to continue doing this as it's much cleaner and quicker than using pencil and paper, and makes it easy to move things around or copy them when needed.

While preparing for tonight's session, I hit upon the idea of making this new task a little easier by setting up a "default" hexmap, shown below. This way, when I need a new area, I've got the players' color dots set up and ready to go on separate movable layers, and the hex grid is placed against a nice white background for visibility. This is conceptually just like setting up one's preferred LaTeX packages or config files as a snippet somewhere on a hard drive. And I'm more likely to use and grow into this software if I make it easy on myself to do something I will do a lot, no? 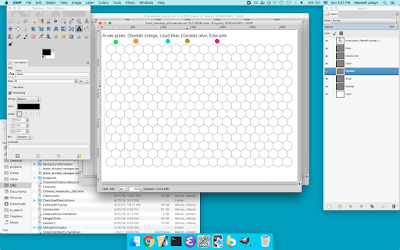 Posted by Maxwell Joslyn at 4:35 PM No comments:

I did some good D&D work today. I added the coat of plates to my economy program, which achieved a few intertwined goals all at once:
These are the divisions of armor types which I've arrived at:
These serve me nicely.
Along the way, I also finally diagnosed and fixed the problem which was making leather armor so goddamn expensive. I was using the square footage of the lamellae for the armor to determine the number of tanned cowhides used, rather than the ratio of said square footage to the leather of one cowhide (50 square feet.) Thus the armor was about 20x more expensive than it should have been.
With that settled, it's now clear that the armors form a reasonable cost progression, all without ever having tried to make that the case. It's quite beautiful, and satisfying.

By the way, I realize now that while I led up to an explanation of my recipe system, I've never actually done a post or posts on it here. That I can fix. It'll be fun to piece it together and pick up where I left off several months ago when describing my zoo of computer programs.
Posted by Maxwell Joslyn at 12:51 AM No comments:

Having taken Alexis's DMing master-classes last fall, and having been back in the DM saddle for nigh on half a year now (after three years of absence), I've been working hard to shore up my weaknesses. Both the classes and my new influx of practical experience have shown that one of my weaknesses is hesitation. Just plain difficulty with making a decision quickly.

In order to combat this, and in order to get some more experience with performance (which is part of what a DM does), I've signed up for and begun taking comedy improv classes at a local theater. The course runs for two months and next week will mark the halfway point.

I can tell you that I'm having the time of my life. I wish I'd done this years ago! It's incredible fun and I've earned some genuine praise from the instructor and from my fellow students.

So the questions now are: is it working? Is it improving my ability to improvise? Have I noticed an improved ability to give answers to players under fire?

Well ... the jury's still out. But I've got something to talk about that I've been ruminating over.

This is old hat to any DM who's done even a little reading. Many DMs, looking for advice, have turned to the established theater arts to find it. "Say yes" has gotten its due as a tactic for responding to player inquiries which promotes expression and creativity.

During a session part of my job is to head off at the pass any player schemes which rely on a lack of understanding of some rule. My game is hard and dangerous -- the players have a healthy fear of falling, for instance -- and I want it that way. It makes the players rely on each other, and it makes the satisfaction of success sweeter when challenges are actual, well, challenges.

What I've been ruminating on is whether or not there's a tension between these two concepts: "saying yes" to preserve momentum and to recognize when the players are on to something, and "saying no" when there's a rule in place and the players have no case for overturning it except to try and sneak some benefit. (To roughly paraphrase the two kinds of input.)

So far my answer is NO, there is no tension. It's just that the different principles apply to different parts of my job as DM. One applies to evaluating player ingenuity, and those interactions with the game world which are more freeform. "Say yes" helps me preserve momentum when the party is on a roll. The other applies to assessing the rules at hand and squashing misconceptions, tangents, or (rarely) deviousness. "Say no" keeps my hand on the tiller, modulating player energy and throwing up roadblocks wherever they get carried away on an incorrect course, one which I know to be a waste of time or invalid.

What do you think?

Posted by Maxwell Joslyn at 8:42 PM No comments: